Roman Weaponry: The Roman Gladius from the 1st - 3rd Centuries

A Foot Soldier's Weapon Of Choice

The Roman Gladius was a sword borne by the foot soldiers of Ancient Rome. Due to its size, it was particularly useful in very close combat situations - easy to wield, easy to thrust, easy to hold, and - most importantly - very lethal at close range.

Weighing around 1.5-2 pounds, the sword was relatively light by many swords' standards, making it easy to carry for both stronger soldiers and those called up to fight at short notice. Its double edge also made it versatile, and effective in cutting, slashing and thrusting in a stabbing motion. 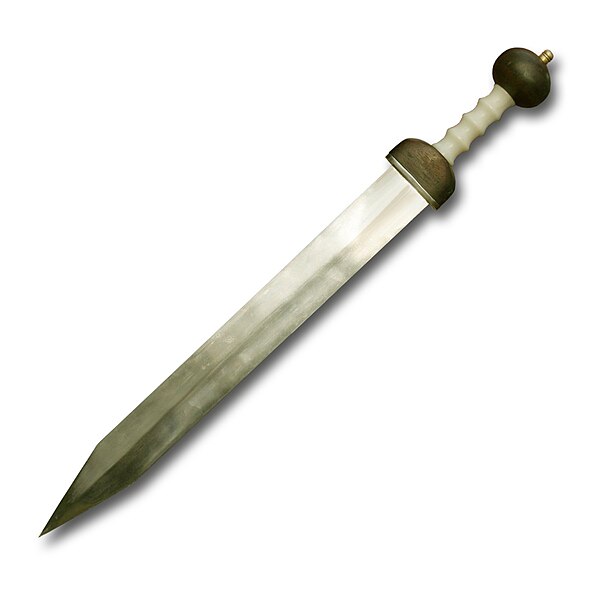 Meaning "Sword" in Latin, the Gladius was developed to be used in close proximity and became popular among the armed forces in around the 3rd centre BC. From ancient artworks such as wall paintings, engravings on tombs as well as mosaics found at ancient sites, it's likely that the Gladius was sheathed in a scabbard made of metal or wood, and hung from a belt for easy access. Some modern day recreations of the Roman Gladius

It's believed there were several types of Gladius in circulation:

Mainz Gladius
Shorter at around 21 inches in length, this variant was made of tinned and gilded bronze, and had more of a triangular point than its predecessor.

Fulham Gladius
Widely used until the end of the 1st century BC, it had a triangular tip and was similar in size to the Mainz Gladius, at around 22 inches. It's named for a replica housed at Fulham Palace, Fulham.

Pompeii Gladius
Named after the town of Pompeii, this was the most popular Gladius and four were found in the town itself. This was the shortest of the 4 known variants at around 20 inches long.

These days, many different styles of the Gladius sword can be found online in different designs, but still modeled after the same shape and approximate dimensions as those thought to be used by the ancient Romans. The gladius has also been featured in many works of fiction related to ancient Roman battles.  Some replicas are housed at museums around the world.

Get Your Own Sword

Looking to acquire your own sword, for decoration, training or a gift? See our wide range of swords here.