Originating in medieval India, the Katar is a push dagger used extensively against Islamic invaders, and later in other battles -- a formidable close-range weapon, which also became a status symbol. 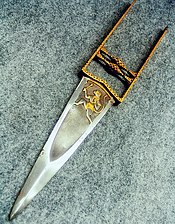 A Menacing Tool -- With Built-In Protection

As well as a sharp, pointed knife edge, this dagger also contains built-in protection using a knuckle guard, which helped protect the hands in case of fierce opposition from an opposing fighter. That said, the knife contained little shielding from the side -- so the attacker needed to be swift enough to strike and then pull back. The katar's light weight and small size helped in this regard, as it allowed the wielder to strike quickly and smoothly.

It was used to attack in a thrusting motion at close range, but could also be used for slicing and thrashing if needed. Because of its short, wide design, the wielder can put their full body weight into a thrust.

The katar's blade is short (usually 30-90cm), wide and triangular, usually fashioned into a very strong point in order to pierce mail without breaking. (It's likely that only more slender-tipped blades were able to actually pierce armour in battle).

The uniqueness of the blade lies in its handle: a 'H'-shaped connection of parallel bars, connected to the blade. This resembles what may have been the inspiration: holding a knife between the index and middle finger. The guard was then added, partly for protection, and partly to make it much easier to wield and thrust.

Status Symbol And Depiction In The Noble Class

In addition to being a useful weapon in close combat, over time the Katar also became a symbol of nobility and high class, and Indian nobles were often depicted with a katar at their side.

Many adorned enamel, gems, special designs or gold foil to make them even more ornate and good-looking. The hilt was often sheathed in a fabric or velvet sheath (as India's hot climate made steel an unsuitable material for a sheath). They were often given as gifts or signs of respect between nobles and families.

Some swordsmiths also forged ceremonial katars, used for religious purposes as a method of worship.

The Katar was featured on the TV show "Forged In Fire":

Ready to find your own sword?
Browse our range >

The Viking Sword: Road To Valhalla