Vikings are a much-revered topic today, with thousands of books and TV series recapping different versions of the legendary Scandinavian warriors who roamed and pillaged around the 8th to 11th centuries BC. Hailing from today's Denmark and beyond, a viking's most treasured possession was usually their sword. In this post, we take a look at the weapons wielded by these fearsome warriors.

Viking swords were so treasured, so revered, so important in culture that they were handed down from generation to generation.

The majority of viking swords were double-edged, and many had a fuller (blood groove) along the length of the blade, to improve balance and also reduce the weight without sacrificing on strength of the steel.

The swords also sported a special handle -- called a Pommel -- which were shaped in 3, 4 or 5 rounded lobes, aimed to improve balance and provide a solid hand grip.

It's believed that 1-2 good raids was enough for a viking to afford a sword, so most warrior vikings owned a sword. That said, swords ranged from the very simple to the extremely adorned: some carried swords emblazoned with jewels, intricate carvings, accents and other decorations. Why were viking swords so prized?

Due to the extremely intricate craftsmanship used in creating a solid viking sword, they were very expensive. For those who could afford one -- or who could acquire one by other means -- they were highly valued as both a status symbol, and as a weapon that could bring travel, glory, riches, and ultimately, entry into The Great Hall of Valhalla, where warriors would feast endlessly until the end of the world (known as Ragnarok).

As such, owning a sword was not only for protection and battle (where it was of course crucial), but also offered the holder a symbol of honour and high status.

Beyond The Grave: The Afterlife Of A Sword

As evidenced by discoveries of some viking burial sites, many historians believed that some swords would undergo a "sword killing" ceremony, prior to being buried with their owner (if the sword was not being passed to the next of kin after the owner passed away). It's believed this served multiple purposes: as a ritual 'passing' of the sword to accompany their owner, and also to ensure no grave-robbers would be able to find and use the weapon. The "sword killing" usually involved bending, cracking or otherwise making the blade unusable.

In Viking culture, it was widely believed that warriors who died with a sword in their hand would go to Valhalla; and those that didn't, would instead be sent to another place after their death. 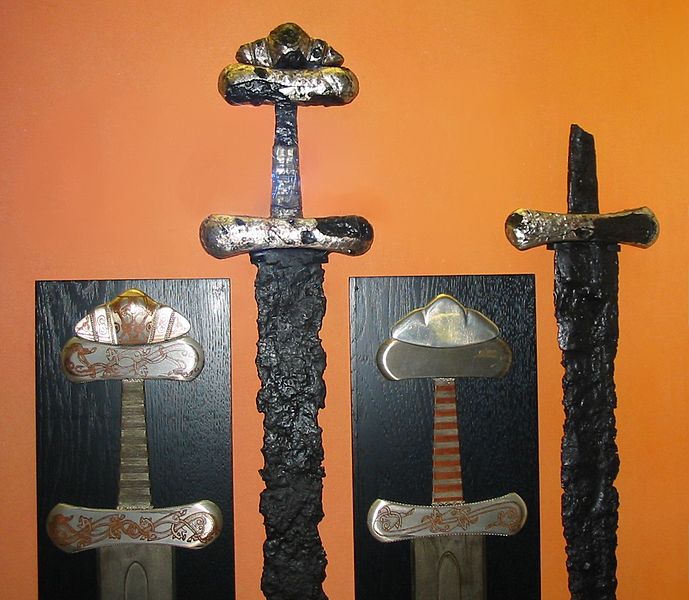 Many books and TV series have featured viking swords, such as King Arthur, The Last Viking, and The Last Kingdom.

Viking Swords were also featured on the TV Show "Forged In Fire", where contestants competed to create the best looking and most functional viking sword:

The Ultimate Push Dagger: The Katar of India